I was a bit out of sorts last evening and this morning.

However, as I got into my car to get to work, I saw the first little rosebud of spring. I looked a little closer, focussed and took a picture. 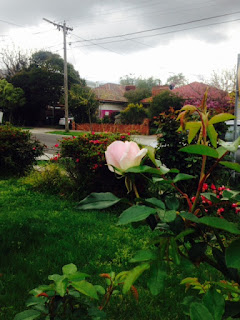 Seeing the first little rose bloom of spring changes nothing, but these things help ground me in the here and now. It defuses imagined crises.

The past weekend brought some glorious weather for a dog-friendly music festival, Dogapalooza.

It was fairly soporific music without bass or many high notes, so as not to distress the woofies. It was just nice to have some chill-time with the fur baby. 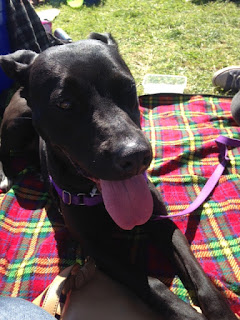 There were hipsters, so many hipsters, and their beasts, from a toy chihuahua to a large great Dane the size of a shetland pony. The Dane, lazily lying on his side, rolled on it's back to allow passers by to pat his belly. His paws were massive. I wonder what he costs to feed? 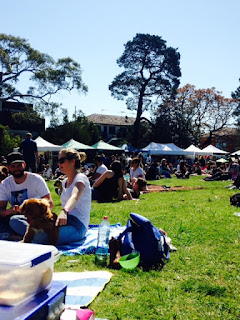 I have been in a bit of pain recently, with my back. It is a longstanding niggle of mine. It used to be on the right side of my lower back, now it has settled in on the left side. I am seeing a myotherapist who is a fellow crossfitter, except she is really good at crossfit. Like, competition grade. I have tight, overdeveloped, overactive quads and hip flexors, and weaker, lazy glutes. It pulls me out of shape. I have to do lots of clams and glute strengthening exercises, which I used to do a lot of when I did pilates but don't worry so much about now. To my detriment, clearly.

It's a short week here in Melb, with a public holiday on Friday, bought back in by our new Premier after show day was "Jeffed"* some years ago. I am using the extra time to attack a few papers and presentations I need to write, and do some weeding. The weeds are taunting me. I asked a person from the grey army to come and give me a quote for the gardening but he got muddled up so I told him not to bother. Some weeding will do me good, anyway.

I am soooooo hanging out for Penang.

* Jeffed =laid to waste or abolished by Jeff Kennett, the 1990s  Victorian Premier with a slash and burn mentality.

And you?
How are your glutes? Lazy like mine? Or taut and functional?
Any nice flowers in your part of town?

The best leader Labor never had.

I write from under a new overlord.

Those of you from Australia - you already know.

It's had a fair smattering of news overseas (with some lambasting of the concept of mid-term deposition of the leader of a party).

I mean Malcolm Turnbull, the best leader Labor never had. Last night, everywhere in Laborland, faces collectively went into palms. For some reason I can't quite put my finger on, I just don't particularly like Bill Shorten, and I think many echo my sentiment. Turnbull seems the obvious choice for those who can stomach neither Tony nor Bill, and hence he is electoral Kryptonite to the Labor party.

The thought is that he is a better bloke than Tone. He thinks climate change is a thing, he has been on record for saying that he agrees with gay marriage. He is eloquent, clever, charming and rocks a spenny suit like a boss. Barrister, Journo, Successful Businessman, Rhodes Scholar, Lifeguard. You could imagine him facepalming every time Tone said something dumb.

I thought that ole moneybags, with his vast wealth, he can fix the debt and fund some pensions. Later I found he was only worth a measly $180Mil.

I was cautiously hopeful. I was buoyed by his victory speech. The positive notion that these are exciting times, that we as a country can make the most of if we are agile. No stabs at the opposition (Julie took care of that though), no fear, no hate and minimal in the way of cliche.

Just reading the above, though, I am more measured about things.

There is no doubt that MT thoroughly sounded out the party and did some deals before throwing his hat in the ring. It would have been suicide otherwise, and MT has bided his time since Feb.

It was no secret that he was not liked by the Arch-Conservative arm of the Liberal party, the Abetz/Bernardi end of the spectrum. He will have had to cut deals with some of these people. This concerns me.

We wake to a new overlord, and nothing has changed. Different face, better haircut, better suit, but same stuff. Gay marriage will go to a plebiscite after the next election. A grovelling tribute to the Coalition's direct action on climate change.

I know he has to bide his time, but I am not convinced.

He has presided over evisceration of the ABC and a shitty substandard NBN. Will that change? Will 100,000 solar panels pop up toot sweet? Will just get on and allow my gay friends to marry? Will he oversee the selling of our Land/Mines etc to China? Can he 'splain to us just why the economy is so bad, and what he and his merry men (and hopefully more women) will do to save it while minimising pain to the most vulnerable?

[I still have not gotten over Joe and Tone's plan to extend the wait period for the dole to 6 months. Will people have lived on love alone, or will they have beaten us up and stolen our tellies for food? No amount of 'splaining would make that good. Dickheads.]

Why do we even think he is so special for believing in climate change and gay marriage? Supporting these things does not make you special, it makes you not an arsehole. First rule.

Yes he is cleverer and a better salesman.

Yet his smile is appearing more smarmy by the second.

This meme summed it up well 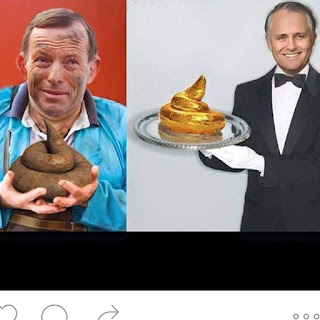 A polished turd is still a turd, and this won't change my vote.

Malcolm Turnbull, I hope you prove me wrong, you silver fox you.

Your thoughts? Happy to hear considered and respectful views from the other side of the fence :D
Posted by cilosophy at 04:29 3 comments:

Email ThisBlogThis!Share to TwitterShare to FacebookShare to Pinterest
Labels: auspol

On saying no, and its consequences.

Last week was a bit of a stressful week at work. Last Friday arvo, I was asked to do something that made me upset, and I cracked it a bit. I immediately set some boundaries, by group email. Nowadays I try not to make calls while acutely upset but sod it, I'd had enough.

The people it affected were gracious and contrite, and things have changed. This is good.

The first half of the year was so frenetic that I had promised myself that, once the PhD was finished, I would try not to work full time, to have some sessions free.

However, the frenetic pace went on, without me even realising it. One of my employers kept on asking me again and again to act at their bidding. The nocturnal tooth grinding continued. I was starting to dread the weekends, as I had to do work that I missed out on during the week. It took this blog post to get me thinking about my work-life balance, and finally I put it into action last Friday.

It bought up a couple of things:

I didn't know what to do with my spare time.

There is so much emphasis on being productive and not wasting a moment that we forget that we don't actually have to schedule every minute. We wear busy like a badge of honour, but for what?

I have been thinking about some restorative things I could do. Not exercise; I do enough of that. Reading a book? Drawing a picture? Playing with the dog? God forbid, watching some telly - Series 3 of House of Cards is begging to be binge-watched.

There are things like the dentist, the tax agent, going to the bank.

Calling a friend. I had become more and more intolerant of talking on the phone, preferring to text. I have friends that need chatting with at the moment, so I have done this.

But people might get angry if I say no.

It might have consequences, and I had to be ready to accept them.

Perhaps I was more angry with myself. That I "should" be up to working full time, plus the weekends. My kind of workplace appears to reward that type of work.

I find saying no stressful, such that I will say yes and do what I am asked as the stress of saying no is greater than the time expended doing the task. I am afraid of being passed over the next time an opportunity comes up, or worse, of appearing like (gasp) a cow.

I am finding that a. people are gonna bitch no matter what I do and b. worthy opportunities will still be available even if you occasionally be assertive.

I have read about the art of saying no for women. It said something about women always having to explain themselves and apologise, where men just say their piece and that is it. Hence I have been recently in the practice of saying no, and taking care not to apologise for standing your ground. I am practicing that too.

I am flexing my "no" muscle. It is scary but it feels good.